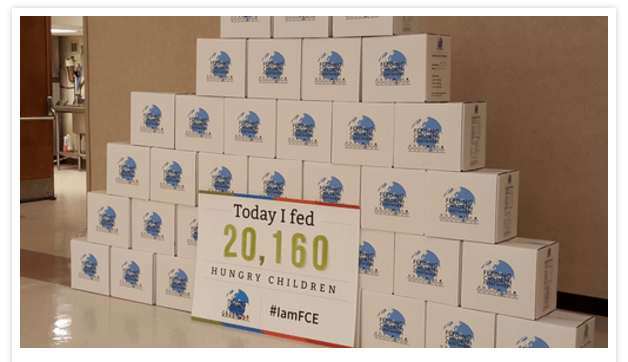 One million, two hundred and fifty two thousand, one hundred and sixty. Need to see that in numerical form? 1,252,160. That’s how many meals were packaged for local food shelters. How did they reach such an astonishing number?

Compassionate DFW is a project founded by Dr. Charles Barker.  In this year’s Compassion Games Dr. Barker and his team organized over 200 volunteers from over 15 houses of worship and 15 nonprofit organizations to come together in a service project they called “Feeding Children Everywhere”.

They started out with the goal of packaging over 20,000 meals for hungry kids and adults.  Astonishingly, they packed these meals in just one day, and exceeded their goal by one hundred and sixty meals.

If the story were to stop here, their effort would still merit a jaw-dropping respect and appreciation for what they accomplished. Wildly enough, it doesn’t.

Dr. Barker got wind of the  Chick-fil-A Foundation and their effort to Feed Children Everywhere. Seven other high schools were added to the original coalition, and together they packaged an additional 250,000 meals that were distributed to local food banks.

These series of generous events became part of a national program that led to nearly 340 schools contributing to the goal of packing 1,000,000 meals that will be “Feeding Children Everywhere” across the United States. That’s right. One million meals!

Bravo to Compassionate Dallas Fort-Worth for amplifying the good they were doing and connecting it to the remarkable work of the Chick-fil-A Leader Academy that is focusing on re-imagining high school leadership.