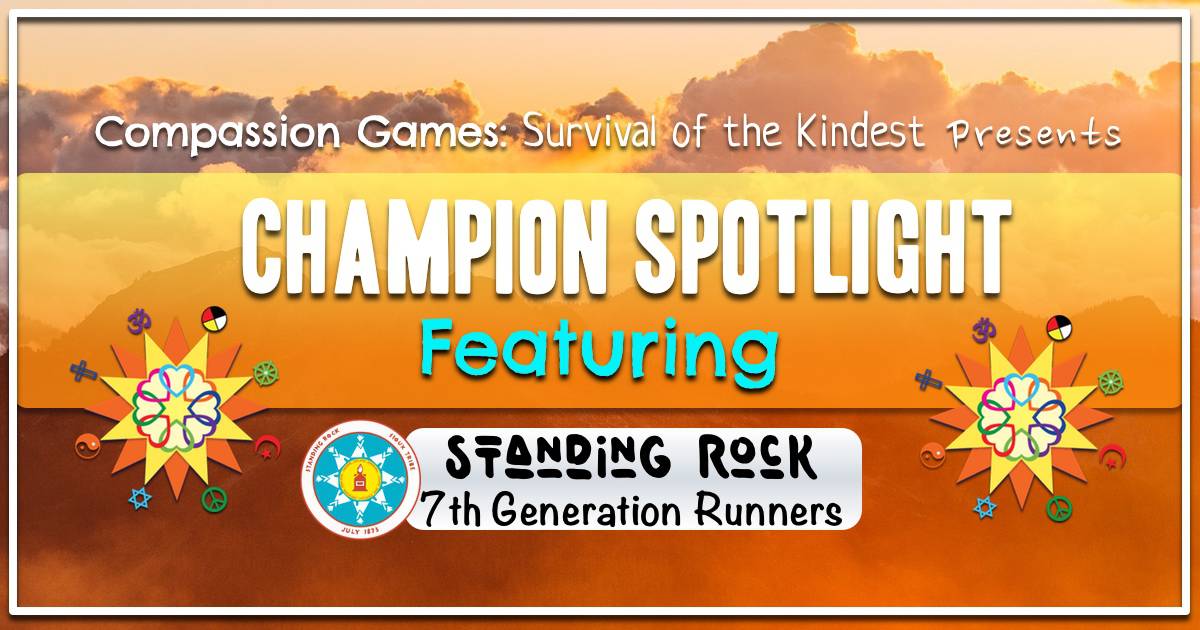 The Global Compassion Torch is in the hands of Champions of Hope and Earth Protectors. We welcome the Arrival of Ms. Bobbi Jean Three Legs, Hunkpapa Lakota, Standing Rock Sioux Tribe, Chris Walton and other youth runners from the Oceti Sakowin, the Seven Council Fires of the Great Sioux Nation, and local 7th Generation Runners as they run across the Golden Gate Bridge in the 7th Generation Inaugural Wopida Run and Ceremony today. This is available from the live stream on Compassion Games FB Page.

Sharing the Spirit of Standing Rock, Protecting and Restoring Mother Earth and Building a Global Fire of Compassion.

A coalition of partners is hosting the Inaugural Global Wopida Run, led by Great Sioux Nation Youth Runners, across the Golden Gate Bridge carrying the Global Compassion Torch of solidarity, hope, and the spirit of Standing Rock to the Great Meadow at Fort Mason on Sunday, February 5th at 12:00 PM.

The 7th Generation Prophecy promised that this generation of Indigenous young people, guided by their Elders, would rise up and inspire other young people of the Human Family to join them in unprecedented, unified, prayerful action to Protect and Restore Mother Earth.

The Dakota people have a special ceremony, Wopida. Wopida is a sacred sharing of gratitude, a connecting with all beings through thanksgiving for all the countless gifts and blessings from the Creator in our lives. Often this includes sharing food and giving gifts of thanksgiving to those who have sacrificed for the upliftment of the People.

The purpose of the Global Wopida Inaugural Run is to be grateful for whatever Life bestows on us, knowing that every test and challenge comes into our lives for our spiritual growth and development to protect and restore Mother Earth.

This spiritual understanding of Wopida requires each of us to live with honor, compassion, love, respect and harmony with all life. The coalition is hosting the 7th Generation Runners in San Francisco during World Interfaith Harmony Week.

The Runners will share their enthusiasm, vision, and words to co-create a just, sustainable and harmonious world by building a global fire of compassionate action to unite the Human Family. We will pass the Global Compassion Torch as part of the Wopida Ceremony taking place on the Great Meadow.

Origins of the Wopida Run

The inspiration for the Inaugural 7th Generation Run began in August of 2016 when the Standing Rock Youth Runners, led by the Ms. Three Legs, ran 2,000 miles to Washington DC and brought national and international attention to the Standing Rock Sioux Tribe and their supporters. Their run broadened the impact of those protecting the waters of the Missouri River against the Dakota Access Pipeline (DAPL), and raised a global cry: “Mni Wiconi – Water is Life.”

Traditionally, Indigenous Peoples across the Americas ran on foot to carry important messages. The Inaugural Global Wopida Run shares the news that at this time of great global change, the promised time has come for the 7th Generation to arise and inspire all generations to heal and resolve “Standing Rocks” everywhere on Mother Earth. Guided by their elders, the Runners carry the message that we are one Human Family, interrelated with all Life, and share a common destiny. The Hurt of One is the Hurt of All, the Honor of One is the Honor of All.

The Goals of the Inaugural 7th Generation Global Wopida Run:

Watch these documentaries about Standing Rock and the Runners on Vice