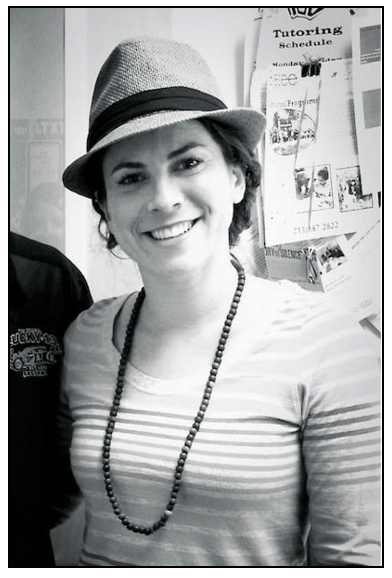 One of the great joys of organizing the Compassion Games: Survival of the Kindest is meeting remarkable people who take the Games and do truly amazing things. It gives me great pleasure to introduce you to Lia Mandelbaum, a writer for the Jewish Journal and a resounding Champion of Compassion.

The following interview with Lia is organized into short segments highlighting some of the incredible things she was able to accomplish with the Games. (The complete interview is available at the bottom of this article.)

How Lia Got Involved with the Compassion Games and the Games in Prison [1:39]

Lia’s path first crossed with the Compassion Games when she took on the assignment of writing about them for the Jewish Journal. Her article got the attention of Shayna Lester, an interfaith minister who brought the Compassion Games into a prison in California. Shanya asked Lia to help get the word out about the remarkable outcome of hosting the Compassion Games in a women’s prison. During the 11 days of the Annual Compassion Games, 4,600 acts of compassion had been committed without the occurrence of a single act of violence. Lia went on to learn how the Games were used in the prison with a set of remarkable tactics to bring them life. For example, the head gang leaders took on the role of “Compassion Ambassadors”, making it okay for others to show compassion without it being held against them. Over those 11 days, the Games helped transform the entire culture of the prison. As Lia states in this segment: “When you treat people like human beings they can rise to the occasion, even people that you totally doubt.”

How Lia Brought the Games to Roybal High School in Pico-Union Los Angeles [0:37]

Lia went on to write her masters thesis on the impact of the Compassion Games in prison (Read: A Case Study on the Compassion Games) and brought the Compassion Games to the high school where she worked as a teacher and therapist. Lia shared the article she wrote with her supervisor, a psychiatric social worker. Her supervisor didn’t even finish reading the article before she knew she wanted to bring the Games to the high school because of their culture changing capabilities: “If this can transform a prison community, it can absolutely help our community,” she said.

Its Not Always Easy to Show Compassion [0:28]

Yet, this is not just any high school. The Edward R. Roybal High School is in the Pico Union area of Los Angeles, which has the highest concentration of gang activity in LA. They are doing remarkable things to respond to these challenges. As Lia describes in the talk: “the youth have difficult hardships” and showing compassion is risky and can be perceived as a weakness; they need to have “rough edges” just to survive and so cultivating compassion is often not an “easy, breezy thing to bring about.”

The Games Were a Student-Led Initiative [0:26]

With a new orientation toward the importance and power of compassion, they shifted into community organizing mode and the student government formed a committee committed to bringing the Games to the school. By engaging student government the initiative was student led. They appointed Compassion Ambassadors to help spread the word. They organized a Compassion Rush, a Compassion Pledge, and a Gratitude Wall where they shared acts of kindness and caring that was taking place around the campus.

Understanding and Communicating about Compassion is Challenging [0:43]

Students Discuss the Shame Associated with Having Family Members in Prison [0:53]

In the discussions they uncovered the difficulty students had in understanding compassion and the great deal of shame around family members being incarcerated.  In response to these challenges, they invited a civil litigator to join them and talk about the need for a more compassionate criminal justice system, and how it was possible to be incarcerated in a way that is humanizing and not dehumanizing. Lia said “I watched as he would talk about people getting incarcerated in such a humane way and the kids, their faces softened, because that’s not a message they hear all the time.”

Music: The Unexpected Doorway for Males to Share Their Feelings [1:29]

Not surprisingly, male students had a difficult time opening up to express their emotions and experiences. There is one student that she describes as having “so much feeling inside but being so afraid to show it”.  Lia discovered that when they listened to music together, this became a safe way for him to show his feelings; she explains that Johnny Cash’s music in particular “opened a door for him and gave him permission to share his deepest pain and anguish”.  So they brought in individuals from the music industry who shared the meaning of lyrics from different musical artists including Marvin Gaye, The Beatles, Sly and the Family Stone, and others. They focused on lyrics that brought out compassion, hope, and solidarity. She reports that the males participated the most in sharing their feelings and experiences with the help of music, which led to the males “wearing their feelings on the outside.”

Traditional Enemies Working Together Was a Shock to the Students [0:45]

They brought in leaders from the Muslim and from the Jewish community to offer an intro to Islam and Judaism through the lens of compassion. She reports that kids could not believe that so called “enemies” were standing next to each other in solidarity and sharing the importance of compassion. Lia said “These kids who are around a lot of gang violence,  they could not wrap their head around a muslim and a jew standing next to each other peacefully and in solidarity, and with such kinship… it just threw the kids off.”

Educating Oneself as a Form of Self-Compassion [0:14]

In the school there is a group called the 9+. These are youth that have to repeat the ninth-grade sometimes multiple times. They brought in former 9+ students who went on to complete high school and even graduate college. The 9+ graduates advised the students that completing high school and going to college was a form of self-compassion.

Dealing with Bullying by Understanding Others as Coming from a Place of Pain [1:11]

Another speaker shared the importance of having compassion for others.  They spoke about when people come at you with anger and hostility to take a pause and understand that they are hurting and “coming from a place of pain”. To learn this, they explained, you can better cope with confrontation and bullying by not personalizing it.

Why the Compassion Games are so Meaningful to Lia [0:23]

Lia stated that “[The Games] put you in a whole other zone when compassion is at the forefront of your head and you’re trying to hold integrity to the mission and you’re really looking at your actions and your words, and, you know, it’s just powerful.” These are great examples of how a community can use the Compassion Games to ignite engagement through competitive altruism, strengthen and bring out what’s already present and working, create an engaging environment for reporting and reflecting, and using the point system as a framework for measuring and building collective capacity.

The Best Measure that the Compassion Games made a Lasting Impact [1:31]

Lia talks about challenges to bringing compassion into a difficult environment. One of the clearest signs that the Compassion Games made a huge difference at the high school was in the following year. Even though the students who organized the Games were no longer at the school, the school hosted the Compassion Games again and plan to continue in the future.  Thank you Lia for being such a Champion of Compassion!

Listen to her complete talk here: