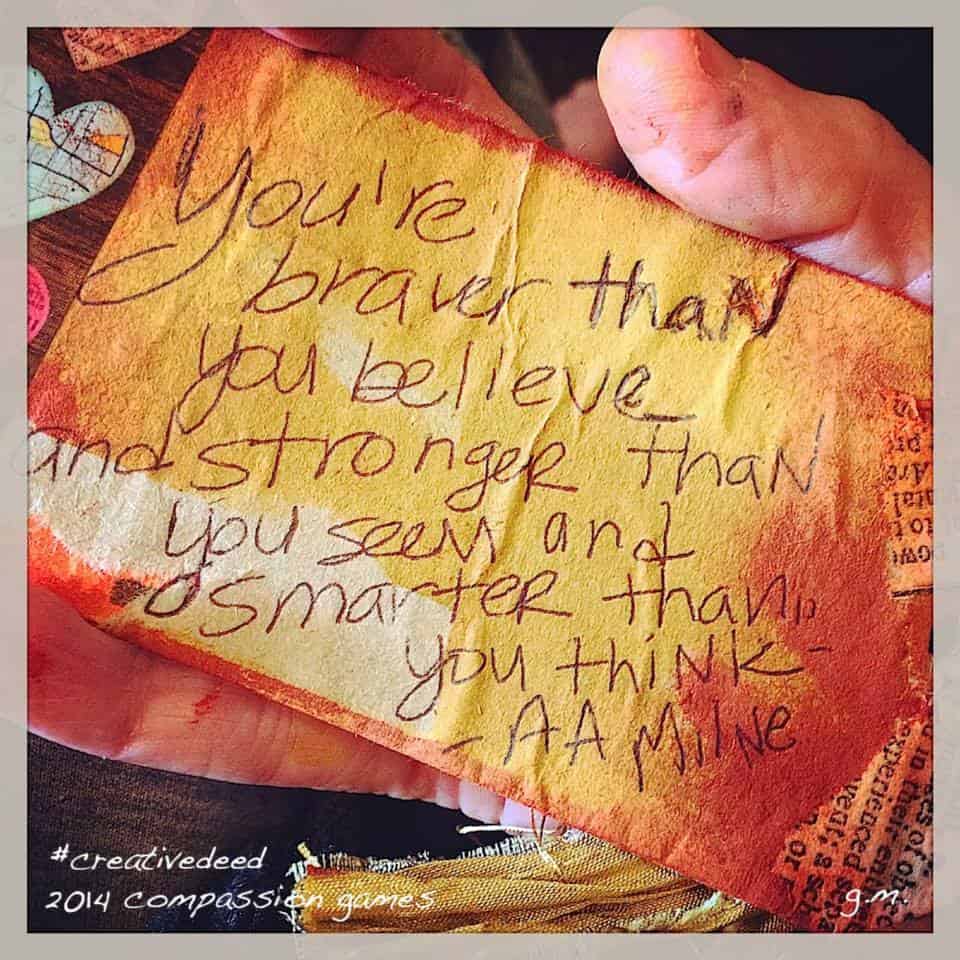 The following article was written by Compassion Games Head Coach Sande Hart — Energies and attitudes are high at the California Institute of Women’s (CIW) 2nd Annual Compassion Games.  Last year, Rev. Shayna Lester, a volunteer chaplain, first heard about the Compassion Games at a SARAH meeting (a women’s interfaith group that I co-founded) and knew this belonged at the women’s prison where she leads a Jewish learning group.  After getting the approval from the warden, she quickly convened a meeting and the women loved it.

Players in the game call themselves Compassionistas. They came up with a point system and agreed to organize their housing units into teams.  After racking up 4600 points in last year’s Games, a shift in culture was well on it’s way. Not all inmates played, but those who did, had profound experiences.

In support of this year’s Games, I had the chance to visit the prison on Day 8. Almost 100% of the inmates are playing in this years Compassion Games, all but 3 women who simply refused to count their acts of compassion.

Once again, Acts of Compassion are being recorded on 2” square pieces of colored paper, each color representing their respective unit. With a goal of 10,000 points, the tiny slips of paper are deposited into envelopes in each unit, of which I learned are stuffed full, some have 3 envelopes completely packed.

Compassionistas have been handing out blank slips, even sliding them under doors to inspire more compassionate action. While everyone wins, and everyone gets frosted cake (a delicacy), the color of the frosting represents the winning unit.

During my visit I asked about the atmosphere at CIW during this years Games; here’s some of what I heard:

One artistic inmate, armed with colored pens and poster paper, made 18 colorful posters that are hanging in each unit to inspire compassionate action during the Games. One poster, decorated with a heavily frosted slice of cake reads, “Let Them Eat Cake”.

When asked if, like last year there had been no recorded incidents of violence during the 11 days of the Games, the answer was no. There has been some violence but over the past month things had gotten rather rough at the prison and tensions were high when the Games began. However, the women credit the Compassion Games for helping to create a more tempered environment and chances are things could have been much worse had they not been focusing on compassion.

To illustrate this, they shared that there had been a number of lock downs early in the week during 108 degree weather with no air conditioning. Still, the women were reminding each other to practice self-compassion. “Drink lots of water, keep hydrated” one had said. “Think compassionate thoughts” said another. They acknowledge that the Games helped them through what could otherwise have been considered Hell. “There’s a sense of self-responsibility, and this is our life.” said one inmate. “We have the power to change the culture and we have to make our own way.”

After first hearing about the Compassion Relays at a meeting about a month ago, one of the Compassionistas shot up in her chair as if struck by divine inspiration and said, “I am visualizing a relay around a running track, everyone running together, passing the torch from one to the next.” She made that vision a reality.

It was not possible for her to organize all inmates to participate according to prison rules, so, undaunted she came up with the solution of 4 Compassionistas from each housing unit participating. They ran, walked, skipped, hopped and/or danced their way around the yard passing the torch to their teammate until the 4th had made her way around the full circle.

Everyone was laughing, hugging, and cheering each other on. Everyone knew that everyone won and that was OK. Some of the younger women helped the elderly, even walking for them despite the fact they were from a different unit.

“I ran as fast as I could.” When other inmates asked her why she was trying to win when everyone wins, she told them, “That’s my compassion! It runs deep. I was just overcome with joy and I was having a ball. I was happy and I was free.” She continued after a long thoughtful pause and tears running down her cheek.  “I feel so accomplished. Imagine, in prison I can bring such joy to people and improve their lives.”

And the Torches? They are made out of toilet paper rolls and colored paper with ribbon.

With the recent rise in tensions, the prison has been elevated to a higher level of security, explaining elevated level of restrictions. The women know there is a dark cloud looming over them, yet the Compassion Games brings them a sense of humanity, a sense of worthiness. “I want my mother to know my time here was not wasted.”

Not all the women at CIW are “hardened criminals” resembling the typical stereotype we all think of. Those we have met are intelligent, articulate and loving women, whom for whatever reason ended up on the wrong side of the law and the gates.

They want those of us on the “outside” to understand they are working very hard to show that no matter what your circumstances are and no matter where you find yourself, you have a choice on how to live and give meaning to your life.  “The Compassion Games gave us the tools to navigate the difference between our reality of the growing restrictions and being the best we can be,” said a lead Compassionista.

They also help women in the Substance Abuse Program who cannot feel their own emotions understand compassion.  When she first arrived at CIW 30 years ago, the inmates could touch, hold hands, give a hug to one another. Things are different today. There is to be no physical contact.

“We’ve been stripped of the basic need of affection. The Games give us that affection.” The quiet that overcame the room, coupled with the tears running down cheeks, affirmed that the Compassion Games have indeed brought something very powerful and important to CIW. But the fact is, it was there all along.

On October 2nd, the women will meet to explore what’s next and how to continue the spirit of the Compassion Games all year long.