He lived compassion at life’s end

Lying in his bed, he listened to the sounds of life.  He could smell the pot roast cooking in the kitchen and hear his housemates moving through the halls.  A movie was playing on his VCR and he was comfortable.  He had not envisioned his life this way.  He loved the beach and the sunshine.  He loved his work and his many friends knew him as a passionate foodie.  Assisted by his pain medications, he often dreamed of those days.  In a way it was a gift because he could live in whichever memory he chose – and he chose the best ones every time.

Chris Hawkins was pretty sure he would not live much longer – although over the years he had entertained this possibility countless times and still – here he was.  Thinking of ‘life’ he sometimes counted off the living that he could no longer accomplish.  First of all, he was blind – so he could no longer watch his beloved movies or see the smiles on his friends’ faces.  His frame was skeletal and he could no longer walk.  His kidneys were shutting down so his ‘big day out’ was going to the clinic for dialysis.  All of his physical and social needs were supported by the staff and volunteers at Rosehedge – his home for 14 years. 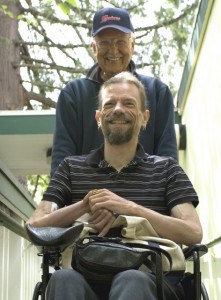 Compassion.  That was the word Chris used to describe the lifeblood that kept him going – countless acts of compassion and love.  The house cook stopped by his room regularly to chat and find out what he felt like eating.  They had long foodie talks and had become real pals.  CareTeam volunteers sat with him, sharing movies and conversation.  One older gentleman became his best friend.  With the help of a wheelchair, they would roam the neighborhood.  He would feel the fresh air on his face and listen to the kids as they raced home after school.  The nursing staff loved Chris – in fact, everyone loved him because he was so ready with a smile and encouraging word even when the days were hard to live through.

One evening, he fell asleep listening to a movie.  The nurse came in to see him and realized that he was in crisis.  That night Chris left his body in the local emergency room and was suddenly free of pain and restriction.  Those he left behind mourned.

Chris’ memorial service was held on a sunny afternoon at the church across the street from his home.  His family came from California and Portland; his friends came just as far. His father, who was in the hospital at the time, attended the service via Skype. One of his former house nurses came from Bellingham.  There were house staff, volunteers and housemates – all gathered to honor him, remember his life and support each other in their grief.  His 8-year-old nephew played the violin.  Memories were shared and the healing began.

And as Chris watched this gathering of people who had touched his life, he recognized that he was right all along.  His world was COMPASSION.

Alanna Gunne is a  Companis Worker placed with Rosehedge/Multifaith Works,  which serves those living HIV/AIDS by providing housing, compassionate health care and supportive services that enhance the quality of their lives.