As part of Compassionate Seattle’s plan to create “collective impact” we put together a physical “stand for compassion” that was on display at Seattle Center. On seven occasions we set up our stand and engaged with fellow citizens about our community and our plans to create a culture of compassion in our region.  We learned how people think and feel about compassion and how they see or don’t see themselves connected to other people and the greater community.

I came to believe that we are not just in an economic recession but we’re in a social recession as well. There’s no question that people want to see more compassionate action, as there is a mood of resignation and hopelessness associated with the current conditions.

However, being at Seattle Center 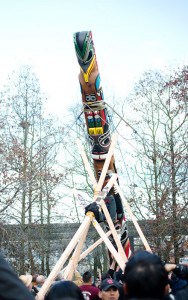 offered us a bright spot as we told the story of the John T Williams Totem Pole Memorial and the difference that compassionate action made in turning a tragedy into an opportunity for healing. Two weeks after the shooting members of the John T William’s family and tribe met with city officials in a “restorative circle” that led to a peaceful creative solution, inspiring all of us to have similar courage.  At the Stand for Compassion at Seattle Center we met Tony Joe who met Rick and John T. Williams when she first arrived in Seattle in 1975.  Listen to Tony Joe describe her relationship with the Williams Brothers.

We also met people like Michael who a few times a week pulls over to help motorists in need. Hear his description of what he does and how he feels he’s representing Seattle when he does it!

The experiences we had being at Seattle Center taught us about our need to reconnect with each other and overcome the social isolation and disconnection.  This led to imagining the Compassion Games as a way to get us out of our norms and connected with each other.  Thank you to all the people who came down and helped us build a stand for compassion: Anne Stadler, Erik Lawyer, Susan Partnow, John Hale, Silvana Hale, Elle McSharry, Jeff VanderClute Libby Burk, Michael Truog, and John and Heidi Malcolmson.  Thank you to Seattle Center and the Next Fifty for supporting us in doing this. On to the games!