Rev. Peggy Price, “The Compassion Games brought me back to joy”

Not just because she is a Reverend Emeritus of the Southern California Seal Beach Center for Spiritual Living, or because she’s deeply involved in her city of Huntington Beach, so much in fact that she has a reserved spot in the interfaith float in the annual 4th of July Parade.

And not because she serves on the Wisdom Council of S.A.R.A.H., a women’s interfaith community building organization in Orange County, CA.  Peggy helped to dream up the idea to create Cities of Compassion throughout CA, launching the Compassionate California initiative. It was that idea that had Peggy running back to her city council and eventually seeing Huntington Beach proclaimed an official City of Compassion.

No, Rev. Peggy is an expert of Compassion.  after witnessing her community in full compassionate action during the 2014 Global Compassion Games.

“I love the Compassion Games! It’s all positive. There’s not a negative thing about it”. Peggy enthusiastically shared. “And what’s more, there’s no ego at play, or if there is, it holds them back, because there’s no one feeding their ego. It’s all about being in service so people have to focus on others, or this does not work.”

Compassionate Huntington Beach has stated that their purpose for playing the Compassion Games “is to make everyone aware how easy it is to put a little compassion in the lives of another and improve the community we share.”

Peggy was proud to report to her City Council that they came in 5th in volunteers on the Leaderboard after counting 2,433 people who served others.  Compared to their closest contenders, the number represents 1% of the city’s population. For a city the size of Huntington Beach with 200,000 people that’s pretty impressive.

Peggy is quick to credit former mayor Connie Boardman for immediately understanding, embracing and supporting the idea of a Compassionate Huntington Beach and says, “I could not have brought the Games to our city without Connie Boardman. She has been the greatest help anyone could ever ask for!”

Speaking of collaboration, one of her greatest delights was watching Hoag Hospital, the Church of Jesus Christ of Latter Day Saints and a Methodist Church cooperating to sponsor a blood drive which drew 64 pints of blood.

Individual players also made a big impact. During the recent heatwave volunteers wielded ice chests and handed out bottles of ice cold water to their homeless neighbors. 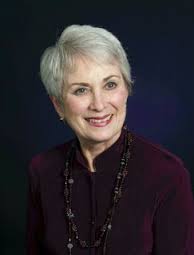 Sadly, 3 years ago Peggy’s adult son passed away.  Suddenly, Reverend Peggy; the community’s patron of compassion and comfort was on the receiving end. However, the long-term low grade sense of sadness was keeping her from being fully involved in much of anything. Despite how she managed to galvanize her city in their City of Compassion campaign and help to develop the 2014 Games, she was carrying something very heavy and understandably not able to fully engage. “This gave me something to get up in the morning for. The Games renewed my faith in the future of what’s possible.  This brought me back to joy.”

Whether it’s our peace of mind, our community, or our world that seems to be falling apart, the Compassion Games give us some new and creative to ways to refocus, recalibrate, and respond the situation at hand.

“Compassion is an action word”, Peggy said when addressing Golden West College during their Annual Peace Week.  The entire Compassionate City and Compassion Games committees are definitely illuminating the joy that is in Huntington Beach and Peggy sits front and center leading the way into the light with compassionate action.