What an amazing day it is to celebrate the most influential human being on the planet, His Holiness The 14th Dalai Lama. His Holiness the Dalai Lama is the spiritual leader of the Tibetan people. He is committed to promoting basic human values, to fostering inter-religious harmony, advocating for the welfare of the Tibetan people and reviving ancient Indian knowledge.

Many people believe he is the reincarnation of Buddha and the Bodhisattva of Compassion. His Holiness The Dalai Lama is a leader of environmental compassion and globally known advocate for peace on earth. He is the Spiritual Leader of Tibetan Buddhism and retired Political Leader of Tibet in Exile. His Holiness leads with his influence, caring for our Earth and inviting all peoples to take action to stop Global Warming. Acknowledging his advanced years, the Dalai Lama appealed to younger generations to “take a more active role in protecting this planet, including the Tibetan plateau.” 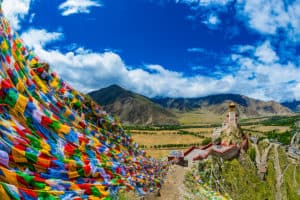 Thousands of prayer flags drape a mountain above the Yambulakhang Palace, Tibet. The five colors of the prayer flags represent the five elements: blue for sky, white for wind, red for fire, green for water, and yellow for earth. Which is the home of Tibetan People who have been displaced and in exile since the 1950’s.

Temperatures for Tibet’s high-altitude plateau — referred to as the Roof of the World — are rising about three times faster than the global average, and are 1.3C higher than they were 50 years ago. The Himalayas are also called the Third Pole, referring to the fact that they are covered in snow and ice and are particularly susceptible to climate change, like the North and South poles. The government-in-exile also argued that Tibetans should be restored as the “true stewards” of the plateau, which has been under Chinese rule for decades and where Tibetans accuse Beijing of mining indiscriminately while forcing nomadic communities to move elsewhere. Up to 70% of the plateau is covered in permafrost, with large reserves of both carbon dioxide and methane trapped within the ice. Scientists say thawing could release long-stored emissions of both greenhouse gases. Methane can be 30 times more potent than carbon dioxide at trapping Earth’s heat.

“This is not a question of one nation or two nations. This is a question of humanity. Our world is our home,” the Dalai Lama said. “There’s no other planet where we may move or shift.”

See and listen to His Holiness the Dalai Lama’s full message from COP 21 in Paris, France about environmental solutions.

We have just gotten back from a private audience with HHDL on April 6th where we had the great honor and privilege to be with a major inspiration and catalyst to why Compassion Games exists. Jon Ramer & Sommer Joy, Compassion Games Founder, and Creative Fundraiser Director were personally asked to be part of a 12 person delegation to invite His Holiness back to Seattle, Washington in 2019. We miraculously fundraised to go to India in a week and were off to India to be with The Dalia Lama. Here are some of the incredible moments with him. 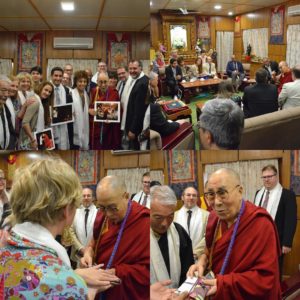 April 6th, 2018 is an unforgettable day for Compassion Games international, sharing the fruits of compassion in action in the world with His Holiness The Dalai Lama.

Stay in touch with the wisdom and ongoing teaching of compassion for our world with this Champion Of Compassion in all the places below.