Spotlight Champion: Norie Huddle with The Best Game On Earth

Compassion Games is thrilled to bring light to an extraordinary global leader of truth and compassion in action. We celebrate and pass the Compassion Torch to Norie Huddle, a profound challenger on the planet who has pioneered for five decades how we can care for our Earth better. Norie has recently contributed the newest Featured Way To Play Compassion Games through  The Best Game On Earth. She recently spoke about her ideas and work for transforming human civilization in a TEDx Talk that will be available on YouTube for the world to see after April 27th. We are so excited to also have her on our Compassion Games Leadership Team.

“Consider that each of us has gifts which we want to contribute and that we can do together what none of us can do alone. That by cooperating, we can multiply the wealth and be more fruitful in our efforts. By cooperating we can be far better stewards of our lovely Earth.” Norie Huddle from The Best Game On Earth 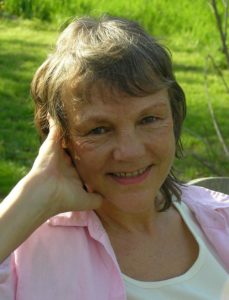 Norie has written seven books on environmental issues and on transforming humanity that have been published and translated into several major languages. Four of her books have been bestsellers (one a NYTimes bestseller). A fifth book, Butterfly, is the “First Special Project in The Best Game On Earth,” and has become a popular global meme that describes humanity’s ongoing transformation process. Her most recent book, Return To The Garden, lays out many of her ideas in the form of a novel and is available on Amazon Kindle.

Much of Norie’s work is focused on helping people create a peaceful, healthy global civilization. She has been a professional interviewer and public speaker in several languages for almost five decades. She does coaching and mentoring, workshop design and facilitation, and consulting with governments, cooperations, and NGO’s.

Norie has an eclectic, international background. She was an American Field Service Exchange Student in Italy for a year, majored in Russian language at Brown University, spent two years in Colombia, South America, as a Peace Corps Volunteer, and lived in Japan for four years where she worked with Japanese colleagues to address their environmental crisis where she worked on environmental issues, interviewed hundreds of Japanese experts and citizens for her first book, Island of Dreams: Environmental Crisis in Japan, that analyzed the crisis using a holistic systems methodology she learned in the Peace Corps.

Returning to the US in 1975, Norie organized Project America 1976, involving a dozen Americans and Japanese who bicycled 5,000 miles in a zigzag route across the US. During the trip, she interviewed Americans about their hopes, fears, and visions for the future and wrote Travels With Hope, a book that became a bestseller in Japan.

Norie was the first person hired by Mobilization for Survival to launch the American antinuclear movement in the US (1977-78). That experience helped her see the limits of “anti” movements and the urgent need for a new kind of “positive, vision-oriented movement.” To facilitate this, in 1979, Norie founded the Center for New National Security (CNNS), to look for new directions in national and global security, broadly defined. In 1980 she launched what is now a 38-year experiment in electronic democracy that she calls “The Best Game on Earth,” which she has introduced on four continents with great success. 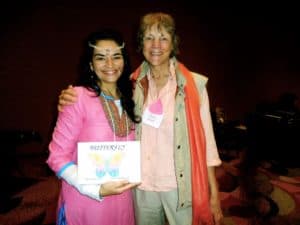 Norie’s 1990 book, Butterfly, has given birth to a global meme of transformation now used widely by people like Deepak Chopra, Barbara Marx Hubbard and many other spiritual leaders around the world.

Under the aegis of CNNS, Norie spent four years interviewing over 400 people about national security issues and wrote her NY Times bestseller, Surviving: The Best Game on Earth. She also participated in numerous citizen diplomacy trips to the USSR during the 1980s, including two US-USSR Citizen Summit Conferences where she introduced “The Best Game on Earth” in 1988. She played a pivotal role in introducing Xerox machines into the USSR in 1989.

Norie speaks fluent Spanish and Japanese, good Italian and Russian, some German, French and a little Chinese. She has built a powerful network of influential colleagues around the world and serves on the General Assembly of the Union of International Associations (UIA), a prestigious Brussels-based organization with global database of over 67,000 NGOs, some with millions of members, all working to strengthen civil society in every sector.

Since 2007, Huddle and her husband, Richard Wheeler, have been living part-time in Ecuador, where they are building the Garden of Paradise, an innovative model of rural development on 350 acres, that is the “Second Special Project in The Best Game on Earth.” To date, this includes a healing and retreat center and sustainable organic agriculture and other initiatives. In 2011, Norie and Richard won the world’s first lawsuit defending the Rights of Nature, a breakthrough legal right guaranteed by Ecuador’s 2008 Constitution that legal scholars consider to be on a par with ending slavery as a legitimate institution and giving suffrage to minorities and women. 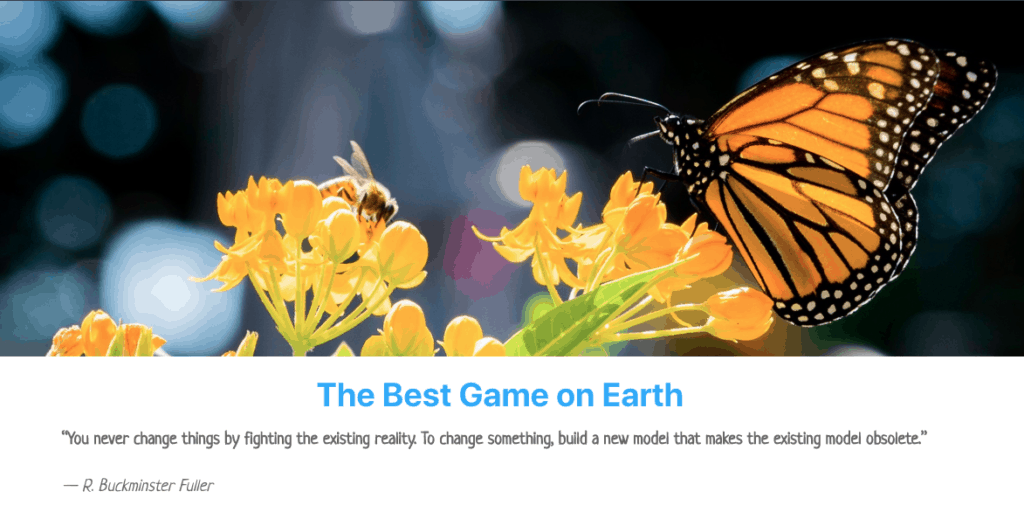 As a way to celebrate all Norie Huddle has done building compassion and leading solutions to transform humanity into a butterfly with Mother Earth, we invite you to join Norie in the 2018 April Compassion Games by participating in this new featured way to play called, The Best Game On Earth.

“Today we urgently need to create CONSCIOUSLY a new and inspiring “life game” that recognizes that most human beings are indeed nice when the “life game” is designed to nurture our good qualities, our wholeness, and aliveness, in every way possible.” Norie Huddle

As a new featured way to play in the 2018 April Compassion Games, we invite you to play The Best Game on Earth, which aims to provide a simple but powerful framework for transforming humanity into a compassionate, caring civilization – what Norie calls a “global butterfly civilization” – that lives in harmony with Mother Earth.

Here is a sneak peek into the basics of how to play The Best Game on Earth.

The core of The Game is very simple:

To get started, read the Goal and imagine how amazing life on Earth will be when we’ve achieved it by 2030.

Take your time and really feel what life will be like when we win The Game by accomplishing this great Goal:

THE GOAL: Peace, health, prosperity, and justice universally on Earth by the Year 2030.

Next, read each of the 10 Rules and imagine living in a world where more and more of us are playing by these rules and where all of us Players are working to build the new social systems that will support our winning The Game by 2030:

For more details about this new ongoing Featured Way To Play the Compassion Games, check out the landing page of The Best Game On Earth that goes into more details. Share your experiences and reflections until April 30th with teams and individuals around the world on the Compassion Report Map.

“Everyone can play. Together we can win.” —Norie Huddle

Here are ways to stay informed and build a relationship with Norie: