Secrets Revealed: Anonymous Agent Spills the Beans on the Secret Agents of Compassion 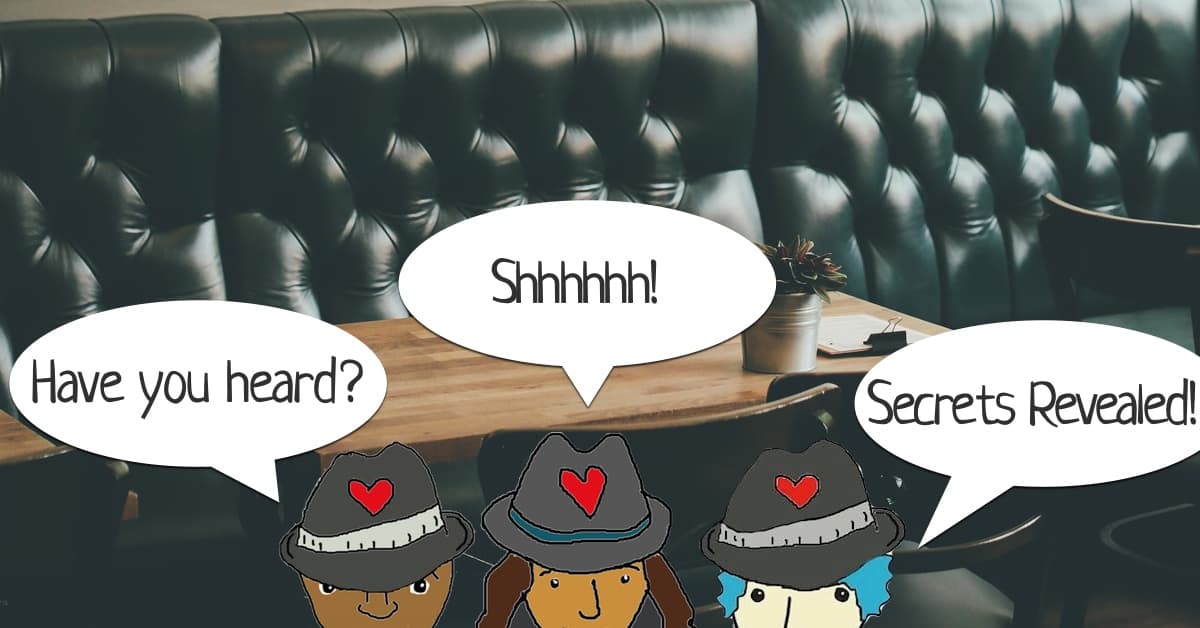 Shhh! Want to know a secret? This story is about to reveal one of the best kept Compassion Games: Survival of the Kindest mysteries. For the past four years, an elite, undercover team have taken on missions of life-altering proportions, changing the very fabric of our world. We think it’s time for the word to get out, for the world to appreciate what they’re doing, and for countless others to join in.

You may not know it, but there is a global team of people who get up each day and are guided to complete
missions of goodness that come straight from their hearts. These people are known as Secret Agents of Compassion, and are 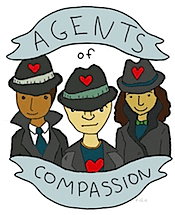 members of what has just been revealed as the International Kindness Team (IKT).

A Secret Agent exemplifies a mode of leadership that differs from the public leader that has come to be over-celebrated in our modern culture. Instead, they represent a form of leadership that can best be captured in the aphorism:

“There is no limit to what a person can do or where they can go if they don’t mind who gets the credit.” 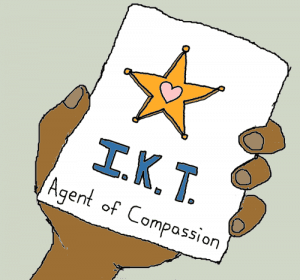 The IKT began with the very first Compassion Games in 2012 and continues to grow, yet remains one of the best kept secrets of the Compassion Games: Survival of the Kindest. That is, until now!

During each Compassion Games coopetition, players sign up and receive a daily mission via email (or on a secret social media site) as a Secret Agent of Compassion. They perform their acts of kindness and then share them with the world via the Compassion Report Map. (Agents can continue to report their secret acts of kindness any time of the year and they can report their actions anonymously, although this is not required.)

On very rare occasions, one of the agents is ‘discovered’ by accident, in which case the secret of their identity 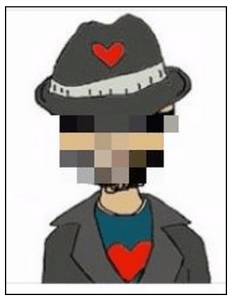 must not be disclosed. We were fortunate enough to find such an agent who was willing to spill the “heart beans” and answer some of the most revealing questions about why someone would want to be a Secret Agent of Compassion, and why someone should participate in the 2015 Annual Compassion Games.

Compassion Games International (CGI) Interviewer: Agent Anonymous, I can’t begin to tell you what a thrill it is to be here with you today. Thank you for stepping forward to finally reveal some of the information behind the Secret Agents of Compassion. We’ve just been dying to know how it all works.

Agent Anonymous: When something is overflowing with goodness, it deserves to be shared and known. I believe it’s time for the International Kindness Team to be revealed in order to get the exposure that is overdue. And I hope doing so will inspire others to become Secret Agents of Compassion, as well.

CGI: Fantastic! We surely hope so. So, Agent Anonymous, let’s begin, shall we? Let me start by asking what got you interested in becoming a Secret Agent of Compassion?

Agent Anonymous: You know, it just seemed like the right thing to do. In fact, I found it easier and more rewarding to be kind than to act indifferent or insensitive toward others. I finally realized that this indifference was also something I was showing myself, and I wasn’t any better for it. But I didn’t always know these things. I had to make many less-than-graceful mistakes to appreciate how much better it is to live from the heart and act with compassion.

CGI: Mmm, that must take serious humility and courage to come to terms with. Why is it important to be a Secret Agent of Compassion?

Agent Anonymous: You know, it really does! And nobody will ever be able to calculate the multiple ripple effects of doing good for another, for the Earth and even for oneself. Suffice to say, I think it’s more important to be an Agent of Compassion than I will ever fully realize myself. When somebody brings light and goodness into the world, it brightens it up for the benefit of everybody.

CGI: It certainly does… But why keep it a secret?

Agent Anonymous: That’s a great question and the simple answer is, you don’t have to. Most agents prefer the anonymity and claim they receive even greater pleasure in doing these acts without any interest in receiving credit. In this regard, it is quite rewarding to be part of a secret, global International Kindness Team. Not even I know who the other members are, minus the few who are on my local team!

CGI: Well, the element of mystery certainly keeps the excitement alive, even for you I imagine! Do you know who writes the missions?

Agent Anonymous: Interestingly enough, I do! I stumbled upon this information quite by accident, but that’s a longer story. The heart and brains behind the secret operation is Andy Smallman, founder of Kind Living and the Puget Sound Community School.  Recently, Andy has consulted with David Spangler, the American Spiritual philosopher and self-described “practical mystic,” to write the missions.

CGI: Andy Smallman? I’ve never heard of him, but I feel like I should have. What makes these people qualified to write these missions? 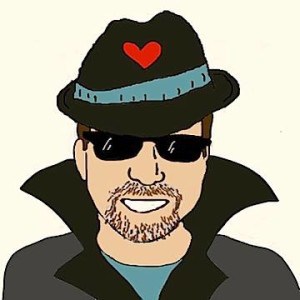 A rare photo taken of Andy by the recipient of his act of kindness.

Agent Anonymous: Well, that’s because Andy is too humble to take credit for all of his remarkable work. Andy has been promoting kindness for well over 20 years. He believes if you develop one’s character with compassion and empathy that success and achievement, however YOU define them, happen naturally. To really understand this, people should check out PSCS, the incredible school he created for middle and high schoolers in Seattle. As for David Spangler, he has been helping people live more authentic lives through his writings, lecturing, and teaching since the early 1970’s. Back then, he was co-director of the spiritual community of Findhorn in northern Scotland. He now serves as director of the Lorian Center for Incarnational Spirituality.

When it comes to understanding, guiding, and inspiring others to act with kindness, these guys have got more than enough chops to write the secret missions for the Annual Compassion Games coopetition.

CGI: Wow, no kidding! And each mission is also paired with such charming artwork as well. Do you know who illustrates the missions to make them so inspiring and fun?

Agent Anonymous: Now there is a mystery for the ages. We know that the artist’s name is Fish (astronaut). 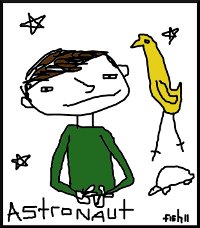 He is a long-time collaborator of Andy’s, but other than that, there is not much known about him. On his website he says: “I love all creatures big and small.” I suppose the rest is up to your imagination.

CGI: Fascinating… the saga simply continues. Agent Anonymous, may I ask something super confidential, something risky for even you to reveal? Can I ask if these missions have ever been life-threatening?

Agent Anonymous: Mmm… you’re really putting me on the spot here, aren’t you? (Agent Anonymous laughs and smiles.) Well, the missions can sure be terrifying! Sometimes reaching out to engage with someone can bring one to panic! There’s no question that being a Secret Agent in the Compassion Games take people out of their comfort zones and directly into their stretch zone, but there’s really no need to panic.  Quite the contrary to “life-threatening”… this kind of play can change human life on Planet Earth as we have come to know it. “Life-altering” may be a better way to phrase your question, and the answer to that question is yes: these missions can be truly life-altering!

CGI: Thank you for answering such a sensitive question there, Agent Anonymous. I can see how these missions can be life-altering, indeed. What is it really like being a member of the International Kindness Team?

Agent Anonymous: I take great pride in knowing that we – all of us – are building this team together to strengthen our collective capacity to act with compassion and insight, to more effectively deal with the challenges of our time. As the theme for the 2015 Annual Games is “Compassion is the power source for social innovation,” we take what we do very seriously, but also, very playfully! I can think of no more rewarding experience.

CGI: Incredible. How does one actually become an agent?

Agent Anonymous: It’s simple and powerful, it’s free and priceless. Sign up here to let the International Kindness Team (IKT) HeartQuarters know that you’re in. By signing up with the IKT, you’ll receive 11 missions during the Annual Games from September 11 through September 21 to ignite and catalyze compassion in our world. That’s all there is to it.

CGI: You can count me in! Do you have to think of yourself as a compassionate person in order to be an agent of compassion?

CGI: Agent Anonymous, thank you so much for being with us today, and for revealing such important information for our world. It has been simply inspiring, and a true pleasure.

Agent Anonymous: Oh, the pleasure has been all mine, really. It’s time for this to be known. I encourage anyone reading this interview to officially become a Secret Agent today, and join the emergence of the International Kindness Team. Together we can change the world, one secret act of compassion at a time. Thank you.

We are thrilled to publish this exposé to reveal this remarkable team. We invite you to join in and be a Secret Agent of Compassion and participate in the world’s largest compassion competition and kindness team! Still have questions? You can find out more here.

“It has been discovered that a powerful antidote exists that can counteract the hate, hurt, and negativity that plagues our global community. This highly potent antidote is called “compassion,” and it exists within you.

Your mission, should you choose to accept it, is to become a Secret Agent of Compassion, and disseminate the antidote to change the fabric of our world.“