How a neighborhood rescued a dog

Once upon a time there was a dog named Raider…

This is the story of how Raider’s needs were met by the actions of  Circle Drive, a compassionate neighborhood in Lake Forest Park, as told in the emails that circulated via our Resource Line:

He has no collar or ID. 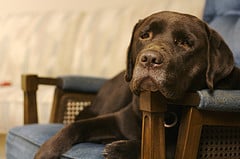 Please put out to the neighborhood:

Raider (chocolate lab)’s been coming here for food once or twice a day. My objective has been to get him closer to the back gate, and then lure him in and close it behind him.  (I’ve rigged a cord to do this…)

In order to make this happen, I’m writing to request that if any other neighbors are putting out food for him, please stop.  He knows that there is food here, and I’m hoping if I’m the only one feeding, that I’ll be able to catch him.

He came up finally, and started eating, but when I pulled the cord to close the gate, he bolted, knocked over 2 big pots, broke a huge glass ball, and got out!

He did come back an hour later and ate…

I’m hoping against hope that I will be able to corner him, but at this point I have to admit he’s so skittish and clever that this may come to no good end.

However, I am going to keep trying…

Raider is staying pretty close to the “circle”, is on the move nearly continuously, and has been in and out of our yard many times over the past several days.

Hi, I am writing from London and just wanted to say how proud we are to be neighbors of all that are showing such kindness to this dog!

We just got here from Venice, where we had a wonderful week of vacation.  We saw many beautiful dogs in Venice, who seem very happy to ride in all kinds of boats and trot along the alleyways, with no parks or very little grass in sight.  We are also happy to report that the European airports we have been through this past couple of weeks are using lots of lovely Labs and German Shepherds as “sniffer” dogs to smell every passenger as they go through the airport.  So much less intrusive that a full pat-down, and such a wise use of these intelligent and talented animals!

Best to all — see you next week!

The saga of Raider continues.

Animal Control was called on Thursday. They are assisting us with the capture.  Their assessment is that Raider is NOT a dangerous dog, just lost and stressed.

We had a home arranged for Raider, but this has now fallen apart.

I am working on another solution, but have also learned that Animal Control and Paws only have limited day time hours… so as you can see, trapping him would not mean an immediate delivery which is also problematic.

Again, I ask you all to allow me to work with Raider to continue to try to build trust with him.  He clearly wants a home, but is not sure why he can’t find his people.

I want this resolved as much as anyone, but the reality is that this is not as easy as it seems… and I’d like to avoid any trauma to the dog as well.  Were I to trap him on Saturday night, I wouldn’t be able to get him to PAWS until Monday… so you see the problem.  Raider is not necessarily interested in working with Paws or Animal Controls’ time frame.

I am so grateful to Armand for his diligent persistence in helping Raider.
It does seem to me that the dog has been clear that he is not aggressive, rather he is searching for safety and a place/people that feels “right”.

Credit goes to Marisa and Scott, who were finally able to lure Raider into an enclosure!  Through the use of stealth and modern technology, they were able to win his trust and get him trapped!

Once trapped, he settled right down, has accepted petting, more food, and is being really sweet.

This saga is now finally resolved.

My thanks go to everyone who has worked to assist in the catching of this beautiful dog.

Marisa used her magic with animals (and horse training experience) to induce Raider’s trust.  She fed him snacks while walking around talking to him, but with little eye contact.  She was also communicating with Scott, who was on his cell phone, speaking / guiding through Marisa’s ear piece. They led him around the yard many times, and on several occasions, and finally into the enclosure.

There, Raider was fed and watered, gently persuaded to come closer and to allow touching, was given a collar and leash, and was taken for short walks in the enclosure – then back out into the yard – then into the house.

Armand came over with more food and treats.  He and Walt have invested a lot of caring in this process.  So has Bea, who also came over to see Raider up close.  The whole neighborhood has shown Raider compassion and caring in general.

We have just introduced Raider to our dog and our cat.  That went OK, but it will take time for them to become “friends.”

We are now having conversations on keeping Raider as a new family member vs taking him to PAWS.

At this writing, they’re living happily ever after:

Raider’s name is now Bear as befits a happy chocolate lab who has found his “people.” His former owners have visited and given their blessing. The family’s resident dog, Biscuit, loves her new housemate. The family cat keeps her distance.