Terry was not a complainer. He slept outside, did odd jobs for several Fremont businesses and was always willing to help with anything.

He came into ROAR, a day center for homeless men, almost daily, for a sack lunch. He would ask if he could do anything for us. He kept his hair short, getting it shaved off when he could… so much easier to keep clean, always a problem on the streets, this business of keeping clean. When I realized that I could cut hair for our clients I brought in my clippers and scissors and told the guys they had to shampoo their hair and then I’d give them a free haircut. Terry, amongst others, would make appointments for the day after they’d managed to find a shower… maybe at the Urban Rest Stop. They had to coordinate this with the days and hours that we were open. 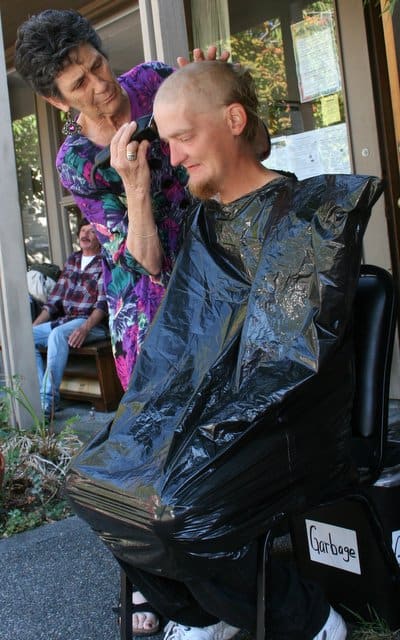 I’d known Terry for about three years and he would occasionally disappear for a few weeks and then pop back in. Finally, he told me he had a heroin addiction. He’d go in for treatment, get released back to the sidewalk and manage to stay clean for a few days, a few weeks…

He showed up one summer day saying he’d just been released from Harborview Hospital and he had to change his bandage twice a day… could I help him?

“We better do it outside” says Terry.

“I’ll be right out,” I tell him and I get someone to cover my desk for me. When I came out Terry had his back pack open, with the gauze, 4″ X 8″ non-stick bandages and bottle of sterile water, to flush the wound, at the ready and was trying to wriggle out of his jacket. I assist him. Then I see that his left arm is wrapped from just above his elbow to just over the top of his shoulder. I run in for scissors to snip the tape and then start unwrapping the gauze from his arm. When I remove the non-stick bandage there is a 3 X 6 inch skinless wound area that looks like fresh ground round…pink and dimply, more gouged out in some area than others. The result of an abscess. “I think I better go in and get gloves, Terry,”

Ever so calmly and carefully I pour the sterile water over his flinching arm, both of us gritting our teeth as I lay the non-stick patch and start wrapping the gauze, round and round up over the top of his shoulder and taping it, top and bottom, to keep it in place. “Now, back into your jacket… you’ve got to keep this protected Terry.”

A Fremont bartender was going to do the evening change and cleansing and I would come in when ROAR was closed, Friday, Saturday and Sunday at 9 a.m.to meet him in the parking lot for the morning shift.

It was a three-handed job, holding the patch, handling the gauze, taping. I was stunned that a person could be released from a hospital in this condition, but Terry, ever optimistic, says “If I can keep it clean and it heals up they will do a skin graph from my thigh.” As I remember he thought, if all went well, it would be in about three weeks.

After about a week Terry quit coming by. There was no way to contact him and then the shelter closed down for lack of funds. I don’t know what happened to this sweet, quiet, 30-something year old man. I try not to think about it, and when I do it throws me onto my knees.

Amber Joy is with  Companis, an agency that fills staffing gaps of nonprofit agencies with professional volunteer and community workers.