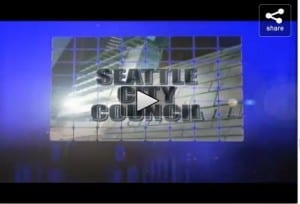 Jon Ramer with Compassionate Seattle network is the Head Gamemaker (for all you Hunger Games fans) of the Compassion Games. He was joined at the council meeting by Louis Mendoza of the volunteer center of United Way of King County and Andrea Brenneke, a civil rights and employment lawyer and board member of Compassionate Seattle and the Compassionate Action Network International. Together, these three representatives displayed their passion and enthusiasm for creating greater compassion in the city of Seattle and, importantly, helping Seattleites discover where compassion already flourishes. You can see the briefing here; the Compassion Games portion begins just after minute 43:00.

The Games, of course, begin on September 21, 2012, the International Day of Peace, the United Way Day of Caring, and the Autumnal Equinox—as Ramer noted in his remarks—to October 21, 2012, the conclusion of Seattle’s “The Next 50” event and the end of their month focused on civic engagement. During the briefing, council member Licata stated, “I think that it’s very appropriate that this is starting here in Seattle given that I think we’re the #1 game-maker in the US if not the world.” Similarly, Brenneke signaled her and Seattle’s readiness to take up the city of Louisville’s challenge to best them in compassion through the inaugural Compassion Games: Survival of the Kindest. As Ramer declares at the end of the briefing, “Let’s all get SuperBetter!”