What was the result when inmates at the California Institution for Women competed in last year’s annual Compassion Games: Survival of the Kindest?

For the first time in the institution’s history, 11 days went by without a single violent incident.

So be prepared for more amazing results when the 2014 games return next September. We’re already making plans!

The 2013 Compassion Games were a worldwide “co-opetition” that ran Sept. 11-21. Players chose to do random acts of kindness, or signed up to be a Secret Agent of Compassion and receive a daily mission. Some contributed to a service project organized by a business, organization or neighborhood, or created their own games.

Activities were recorded when players submitted a quick online report. During the 11-day Gift Giving Festival — the “cooperation to compete” — there were over 1,200 “incidents” of compassionate action submitted to the Compassion Map.

Here is a snapshot of the total results for the teams that participated in the 2013 Compassion Games. 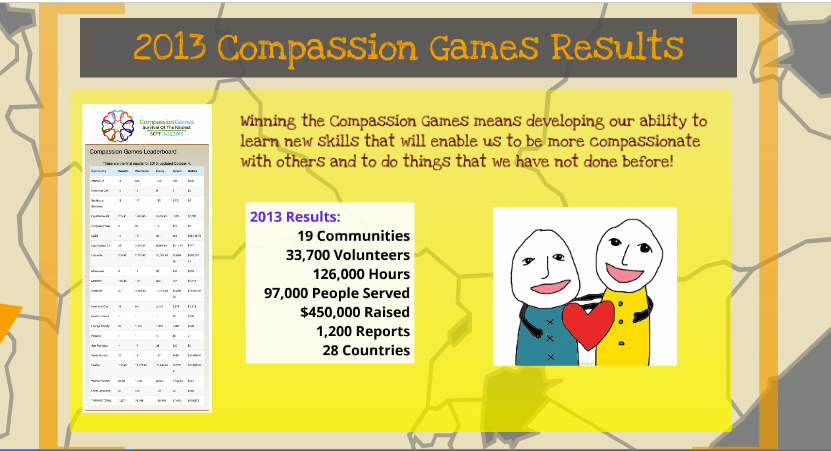 The 2013 games included individual players from 28 countries. There were 19 community teams who organized local games in 4 countries – the United States, Canada, Sweden, and India.

The results were impressive.

And the California women’s prison?

“Inmates and staff want to continue each year but more importantly they are now looking for a way to keep the energies alive all year. Hopefully, with the support of the administration, that will happen.”

Already, plans are being made for the 2014 games, organized as an 11-day Gift Giving Festival inspired by the Potlatch from the Pacific Northwest and the Giveaways from The Northern Plains Tribes. The Games take place Sept. 11-21.

We will be introducing leagues as a way to organize the Games. There will be leagues for cities, schools, hospitals, service organizations, cultural groups, tribes, and other groups. 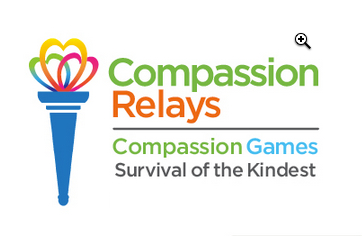 Compassion Relay participants commit to carry the torch for a week and report on example of compassion in action they participate in or witness. Torch carriers pass on the Compassion Torch to others in their community.

So stay tuned for updates and to hear about ways to get involved. We’re excited to be moving forward on the next year of the Compassion Games.