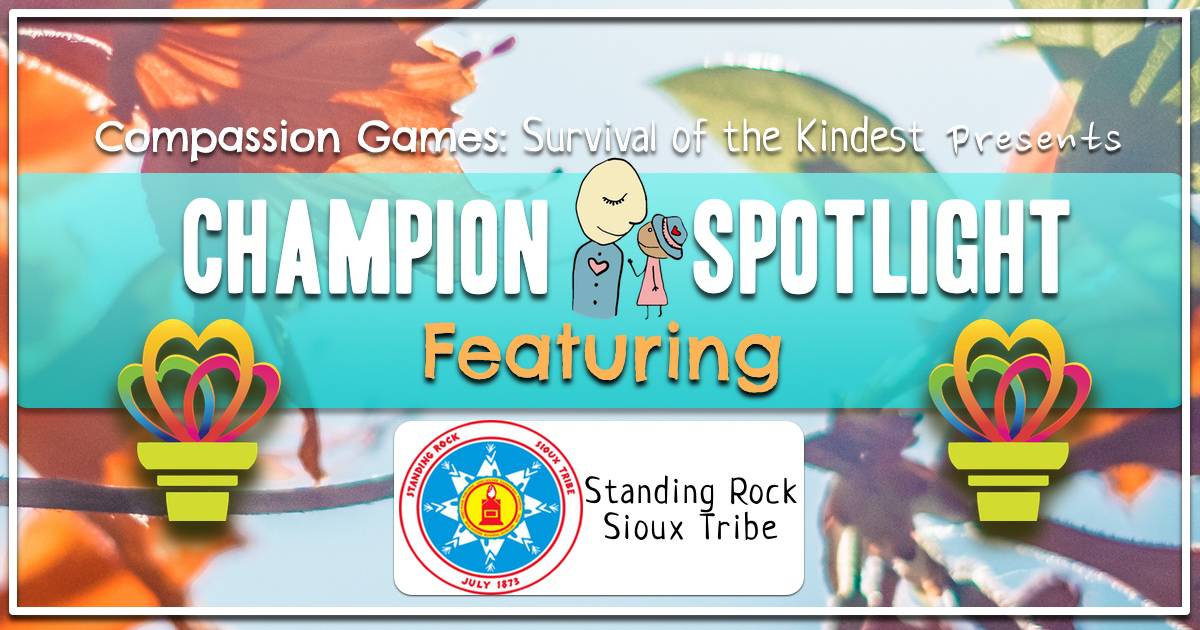 For Day 12, the final day of the Giving Games, we are profoundly humbled to pass the Compassion Torch from Gary Zukav, Linda Francis, and Seat of the Soul Institute to the honorable Oceti Sakowin, Standing Rock Sioux Tribe.

The last 11 days have been a remarkable journey, made up of one act of compassion and generosity to the next from players and teams around the world, as well as from one Champion of Compassion, accepting the light of the Compassion Torch, to the next.

Youth, Interfaith communities, and Indigenous Peoples have come to stand firmly together, to unify and say NO to the Dakota Access Pipeline, but even more so to say a resounding YES to a future that is sane and healthy, that has clean water to drink for all people. As this takes place, we can each begin to feel what the Standing Rock Sioux call “Wopida” (from the Dakota people) or “Wopila” (from the Lakota people) in our hearts and prayers.

And so it is time for us to come together, to Build a Global Fire of the human spirit, and unite in a Global Wopida Ceremony together!

Wopida is a word with profound, infinite, eternal meaning and transforming spiritual energy. The purpose of the December 10th Global Wopida Ceremony is to be thankful and grateful for whatever Life bestows on us, knowing that every test and challenge comes into our lives for our spiritual growth and upliftment.

It is from the loving guidance of Indigenous leaders such as Chief Arvol Looking Horse, Faith Spotted Eagle, Sioux Chairman Dave Archambault II, Hereditary Chief Phil Lane Jr., and youth Indigenous leader Bobbie Jean Three Legs that the events at Standing Rock have resulted in a global movement, and have received global support. It is from the actions of water protectors arriving from around the world, comprised of over 300 Indigenous Nations, youth activists, interfaith communities, and even two thousand veterans, that resulted in recent decision by the Army Corp of Engineers to deny easement to Energy Transfer Partners to build an oil pipeline under a lake on Oceti Sakowin land without their consent.

Indigenous youth activist Bonnie Jean Three Legs is credited for sacrificing much in order to organize the water protectors at Standing Rock. We would like to honor her as well. Watch this clip of Bobbie Jean Three Legs speaking on behalf of the vision of her people, and all people.

We also want to honor the youth, and the organizations that represent them: Play for Peace, Xiuhtezcatl Martinez and the Earth Guardians, the International Institute for Child Rights Development, the BlueYouth Project, the American Indian Society for Engineering and Science (AISES), the Peace and Dignity Runs, Nemo Patel and Empty Hands Music, the Centre for Global Education, and Dr. Jane Goodall’s Roots and Shoots.

We want to honor the Interfaith leaders at the Agape Spiritual Institute, the United Religions Initiative, and Monica Willard who is the UN Ambassador for URI at the United Nations.

And of course, we want to honor the 92nd St Y and #GivingTuesday., the Seat of the Soul Institute, Compassionate Louisville, and Unify for making the Giving Games possible.

It is due to all of you that the fire of compassion is burning brightly in these challenging, seemingly darkened days. Thank you for your determined, relentless efforts to bring a vision of a safer, kinder, more just world we know is possible into reality.