This year’s Global Unity Compassion Games was epic and off the charts! From September 9th through September 24th inspiring events and activities were organized by players all over the world. The Compassion Games demonstrate the power of compassionate action as we play and offer community service through the fun of a global “coopetition” – a collaboration among teams in which nobody loses and everyone wins! 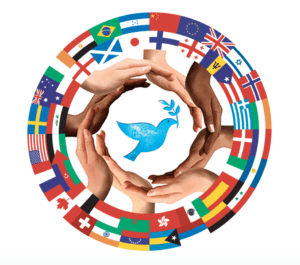 locally” (e.g. from service projects to random acts of kindness). The theme was building bridges to peace, prosperity, and the planet. We are grateful to LUSH Handmade Cosmetics, the Maritz Family Foundation, and all the other donors who contributed to underwriting this year’s September Games.

We are inspired by the collaborations that took place across divides, to unify and share intentions, and to act together to create a peaceful and loving world. This report celebrates the amazing Players (Agents of Compassion) and what they did e.g. how about multiple teams packing hundreds of thousands of meals for victims of recent disasters?

We Reached and Served More People Than Ever

Here are the Final Results! 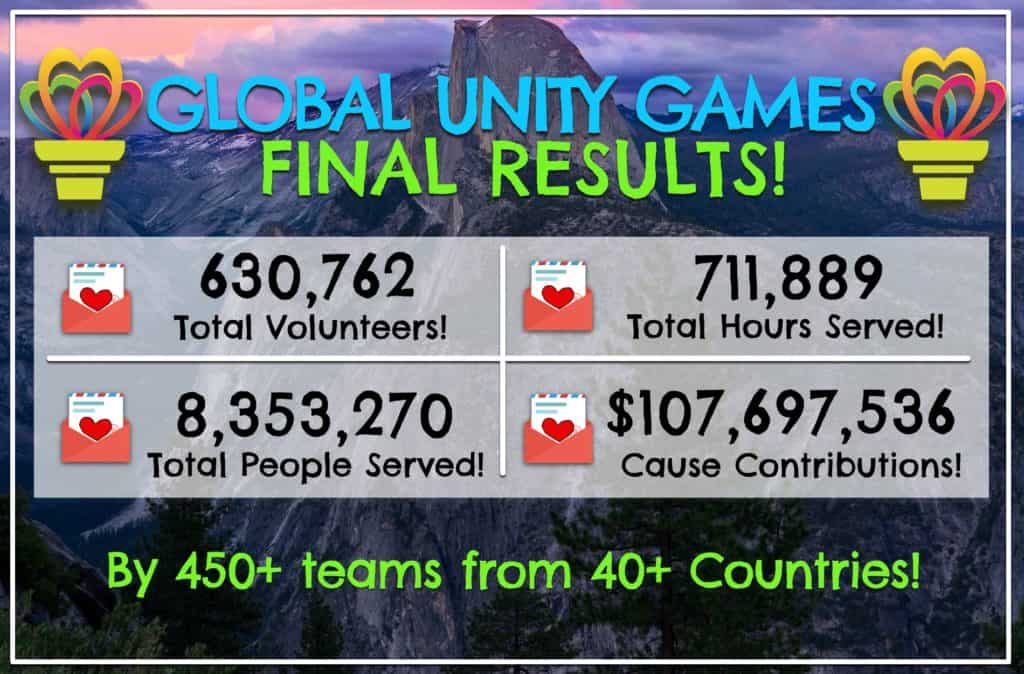 Over 600,000 volunteers served over 8,000,000 people and raised over $100,000,000 to support local and global causes (not the Compassion Games)! The recent hurricane disasters became a focus for fundraising during the Games. Teams in Austin and the Rebuild Texas Fund raised $68,000,000.  This team in Dallas raised over $39,000,000 as they reported: “We are already compassionate, but we can always be more so.” View the report from Dallas here.  Visit the Compassion Report Map to see all the reports and the Scoreboard Map Viewer just to see the numbers. To understand the numbers in greater detail we have prepared a scoring guidelines document.

Additionally, the “Compassion Games Creates Climate Change” video was viewed on Facebook over 7 million times, shared over 175,000 times, and reached over 18 million people by the time the Coopetition was over! Thanks to Unify there was another great video and to Jacob Devaney for articles on Huffington Post.

Discover what players did during the Games, see how we are “getting it right” in nearly 500 reports. Here’s a Facebook album with selections from the Compassion Report Map. Wherever possible we tagged the players. We can now communicate with the agents who made these beautiful acts of compassion occur. Each image links to the report that you can now share on Facebook or Twitter. 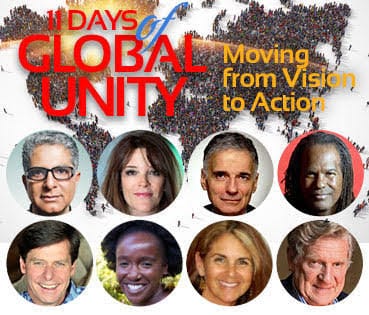 Global Unity Tele-Summit: The 11 Days of Global Unity from 9/11 through 9/21 was hosted and produced by We the World and partnered with the Shift Network and the Compassion Games to promote the Telesummit that included some of the most visionary thinkers and activists of our time: Deepak Chopra, Ralph Nader, Marianne Williamson, Robert Thurman, Karenna Gore, Nwamaka Agbo, Michael Beckwith, Jonathan Granoff and many others. You can listen back to the sessions here. Bravo to Rick Ulfik and his team at We the World for producing such a remarkable and inspiring 11 Days of Global Unity. We featured We the World as a Champion of Compassion.

Films for the Planet featured six beautifully-produced, award-winning documentaries that inspire a planetary

culture of peace for 16 days (from Sept 9-24). People signed up to stream films about peace and solutions in their community and participate in their live stream webinar: “The Neuroscience of Peace – Tapping into Our Hearts’ Intelligence” which highlighted the cultural and scientific evidence supporting globally synchronized meditations and activities. We featured Films for the Planet as a Champion of Compassion. 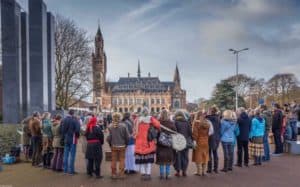 September 13th 2017 was the 10th Anniversary of the adoption of the United Nations Declaration on the Rights of Indigenous Peoples (UNDRIP), encompassing some 370 million Indigenous peoples in more than 70 countries. Thanks to Four Worlds Europe we brought the Compassion Torch to an Indigenous-led ceremony at the Hague. The Indigenous People were invited into the Peace Palace to be part of the Peace Pledge launch.  Indigenous Wisdom reminds us to take into consideration future generations in every decision we make as One Human Family. 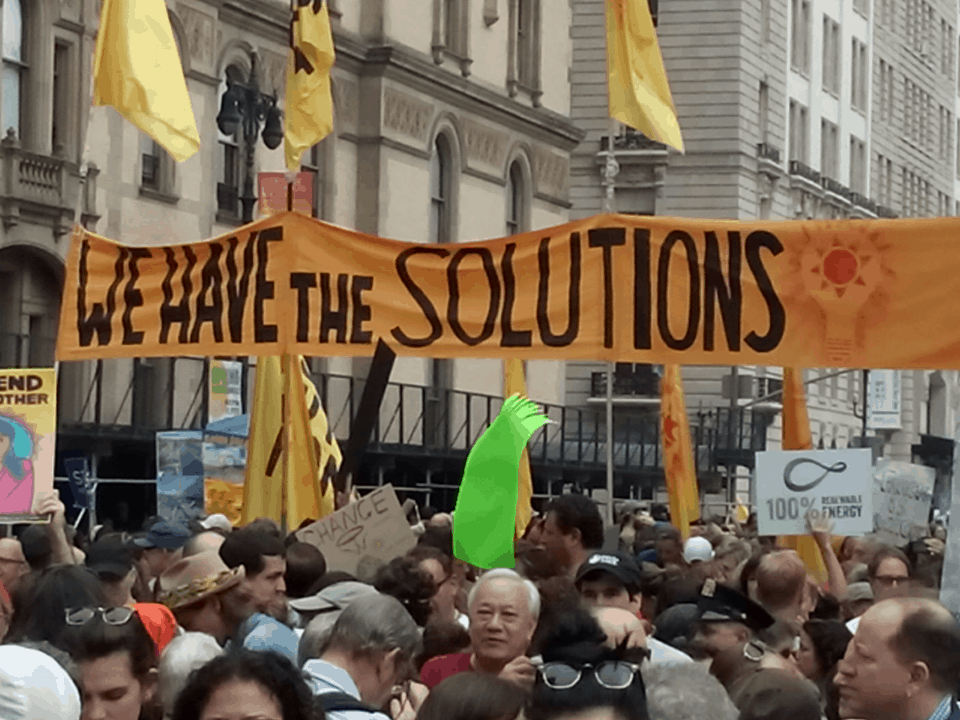 Global Solutions Day was a worldwide activation for a Global Solutions Revolution of Peace, Unity and Cultural Re-Education. The day was dedicated to identifying and co-creating a platform for sharing the myriad of solutions that already exist. We featured United Earth as a Champion of Compassion.

For every Compassion Games “coopetition” a set of “missions” are sent and shared carrying the spirit of a coopetitions’ particular theme. (We treat these missions as “secret” since some agents prefer to do their good deeds anonymously.)

Cities and Regions League as a Bridge to Prosperity

Northwest Ohio put together a collage of their reports on the Compassion Report map! 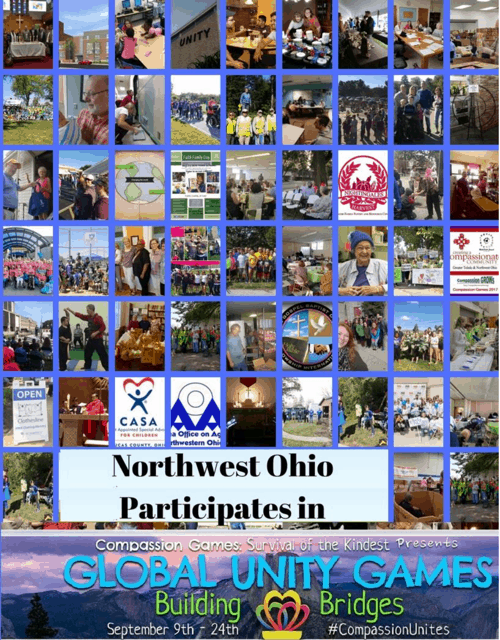 The Compassionate Cities and Regions League is also building bridges to many other city initiatives such as Resilient Cities, Smart Cities, International Cities of Peace. We passed the Compassion Torch to Sol Trombo Vila from the Trans National Institute who is managing the Transformative Cities Initiative that has cities sharing their experiences of tackling and finding solutions to our planet’s systemic economic, social, political and ecological challenges. 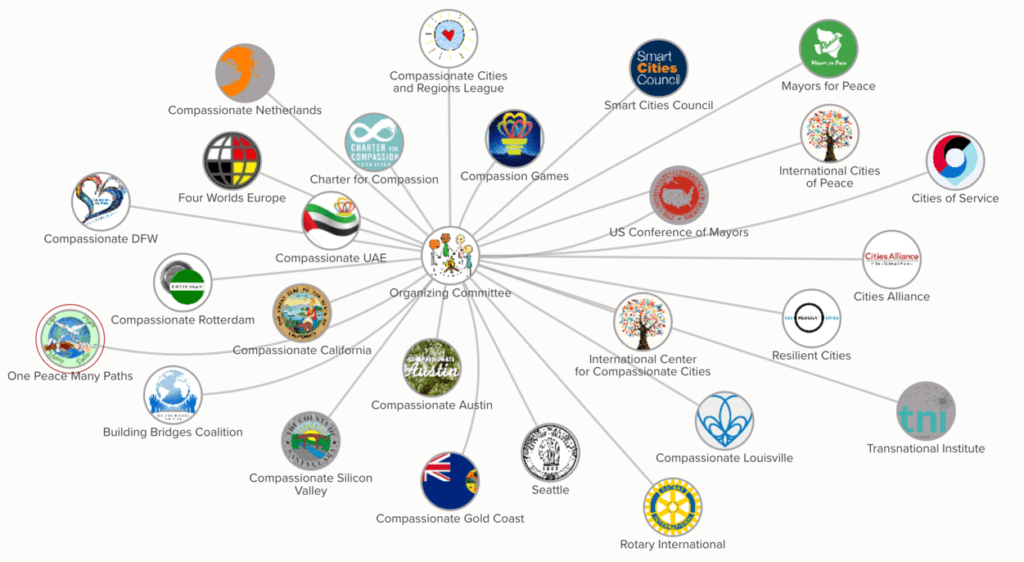 Thanks to Gerthe Lamers we witnessed first hand the power of connecting cities within a region by visiting with Compassionate Netherlands and the different mayors and cities working to build a compassionate region.  We were inspired by the Mayor of Rotterdam and their WEsociety Programme that is “uniting the city” with the keywords: dialogue, compassion, inclusiveness. Listen to the Program Manager, Vera Bauman explain the WEsociety:

Building a Global Fire of Commitment to Compassion 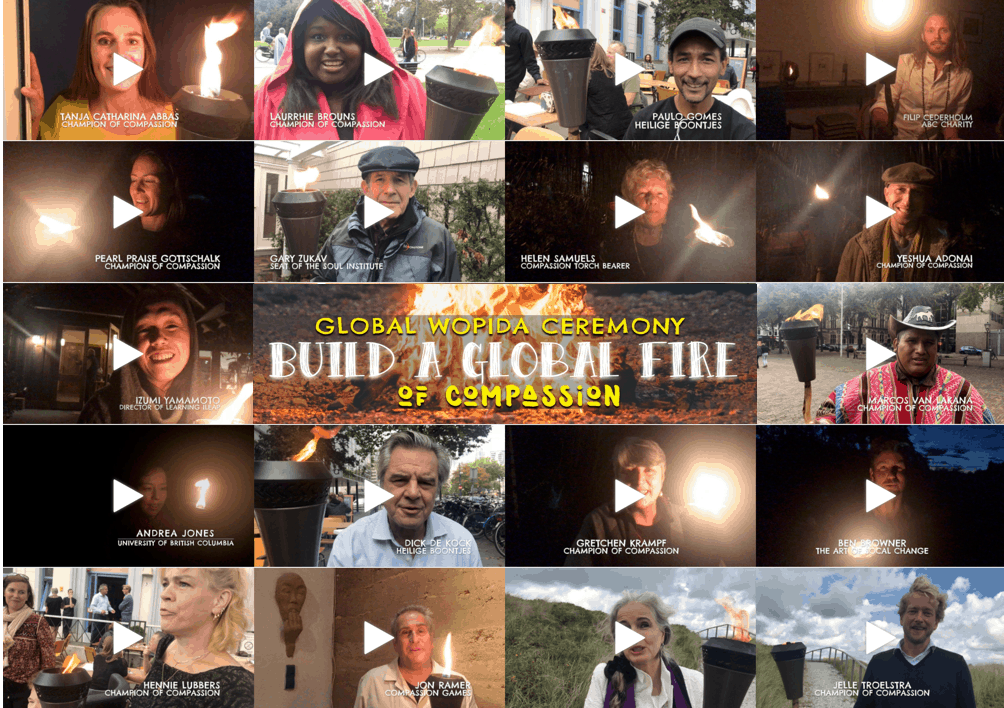 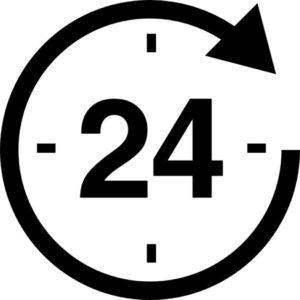 We introduced a new Way to Play in honor of the vision of a 24 hour period of non-violence and peace.  We challenged ourselves and others to remain calm and engage in a 24 Hour Compassion marathon of sorts sharing the work of the amazing Champions of Compassion from all over the globe.  The 24 Hours of Compassion featured  Champions of Compassion including ABC Charity, Charter for Compassion Australia, Aero Municipality, 9/11 Day, Parliament of World Religions, Films for the Planet, United Earth – Global Solutions Day, Network of Wellbeing, International Day of Peace, Synergized Earth Network, We the World, Reconciliation Canada, Combatants for Peace, Peace Pledge Project, Be the Peace. 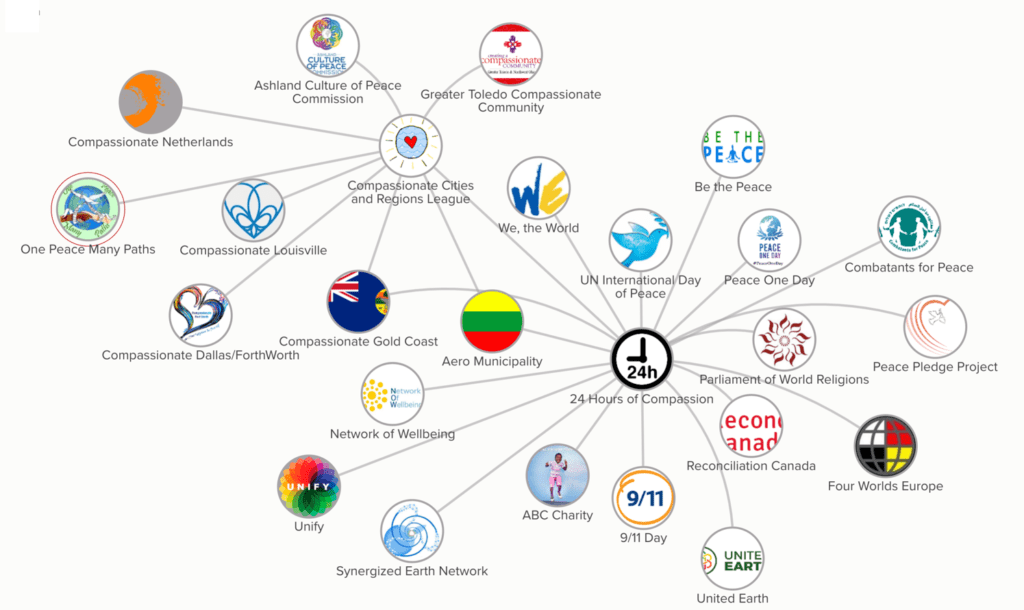 An exciting aspect of each Coopetition are the new Players, Partners, Ways to Play and possibilities that emerge. Thousands of new people “Liked” our Facebook page, hundreds joined our Facebook Group and are following us on Twitter and Instagram.  We met and added two remarkable Legends to our Leadership Team.

Norie Huddle, the New York Times best-selling author of “Butterfly” and the inventor of the “Best Game on Earth” has joined our Leadership Team. We are starting out partnering to feature the Best Game on Earth and to co-design “Clump and Cluster“.  This is the story game of how we come together and transform from a caterpillar into a butterfly.  Norie and her husband are also building the Garden of Paradise in Ecuador and played a key role in Ecuador recognizing the Rights of Nature in its constitution. 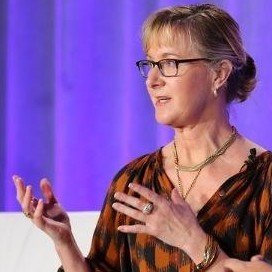 Another remarkable Game designer and leader joined our Leadership Team. Megan Gaiser recently founded the 21st Century Leadership for Diversity Movement. With a background in film, Megan became one of the first female CEO’s in the game industry and with her team, pioneered a new market niche – inspiring games for girls, with the Nancy Drew game franchise.  Awards include: “Game Industry’s 100 Most Influential Women” Next Generation; “Top 10 Most Influential Women of the Decade.”  Megan will be co-designing Leadership For Diversity the game and collaborating with Norie and the Leadership Team on “Clump and Cluster”. 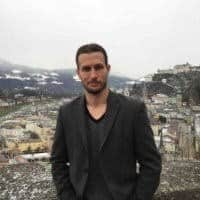 Another outstanding new partner is Robert Peloquin, founder of MyStudio Live a multiscreen, live video chat app that can connect face-face and stream it on Facebook. Robert is also a digital advertising specialist with experience working with advertising agencies and will be building relationships connecting the Compassion Games and like-minded brands.

Clump and Cluster: Weaving Our Strategies Together

The natural evolution of Compassion Games Leagues is similar to the process of Clumping and Clustering. For example, by bringing the cities and regions together into a League we are able to enhance communications by linking teams that are like-minded and facing similar challenges. Other Compassion Games leagues follow this pattern of clustering together teams that are related to common areas such as youth and schools, faith and interfaith communities, businesses, innovators, philanthropies, sporting teams, etc.

We are planning a league of “Charters, Declarations, Manifestos, and Pledges” that will form a league and play Clump and Cluster with the goal of weaving strategies together and play in the Games to turn their Good Words into Good Deeds as they strengthen and support each other. We have begun to identify who can “Team -Up” and play together. 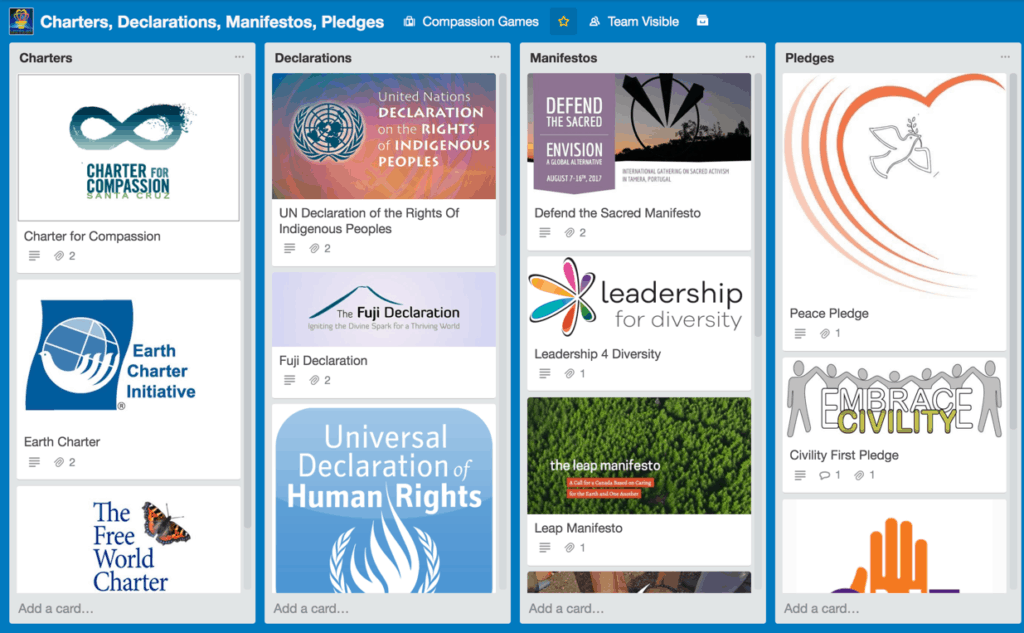 date. We are looking to spark a self-replicating Compassion Games Movement. We invite you to sign up and share the Games with others. We are grassroots and appreciate your participation and financial support. You can make a one-time donation or become a monthly Game-changer here. If you have any questions or suggestions please contact Jon Ramer at Jon@compassiongames.org or (206) 972-7356.